A charming 18th century Chinese watercolour picture of two parrots perching on branches, vividly drawn in orange, blue and green pigments. The drawing is framed within a coloured mount and framed in an exquisitely carved and water gilded Chippendale period frame dating from about 1770. 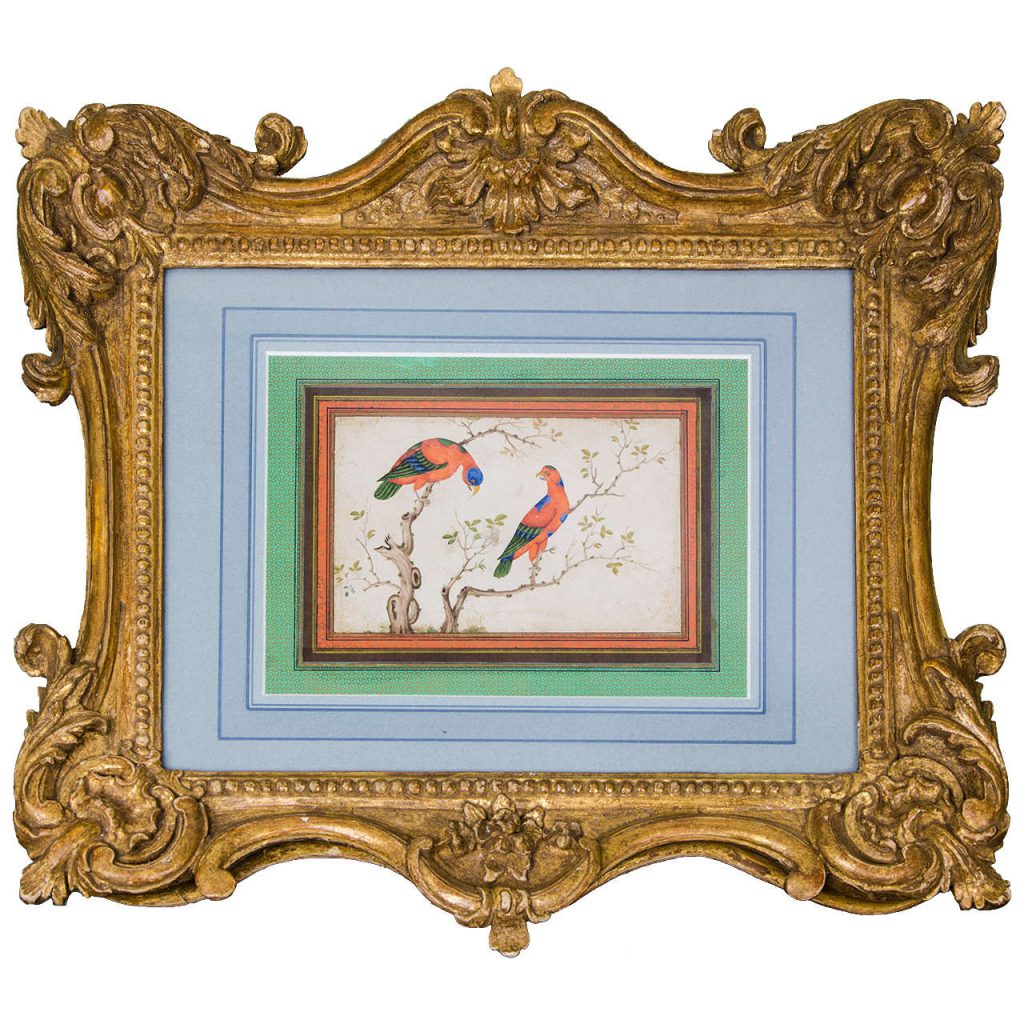 A pair of portraits of young ladies, c. 1700. Pen, ink and wash, on blue paper. From a former collection where they were attribuited to Kneller which appears engraved on the mounts. These are more likely to be by one of Kneller’s studio assistants like Edward, or his Brother Robert, Byng. They were both studio assistant of sir Godfrey Kneller and held in high esteem by the artist. Although a number of assistants were undoubtedly employed at Kneller’s studio, this particular type of portrait drawing has generally been classified as the work of Edward Byng in conjunction with his brother Robert (ca. 1668-1720) who was also an assistant to Kneller. Both drawings are in period 18th century Georgian frames with gilt slips. 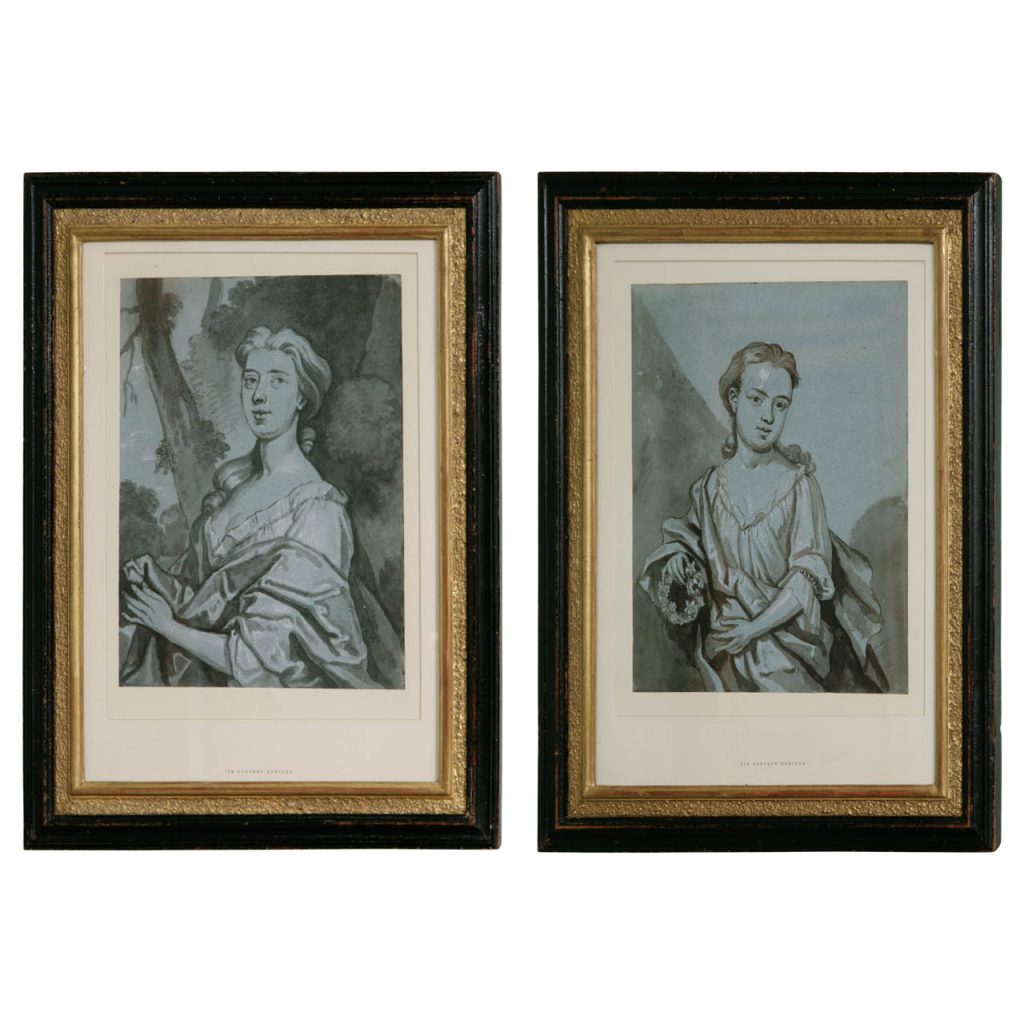 Van Loo was born in Nice and followed his brother Jean-Baptiste to Turin, and then to Rome in 1712, where he studied under Benedetto Luti and the sculptor Pierre Legros. After leaving Italy in 1723, he worked in Paris, and received the first prize for historical painting in 1727—as did his future rival François Boucher. In 1734 he settled in Paris, and in 1735 became a member of the Académie Royale de Peinture et de Sculpture and rose rapidly in the hierarchy of the academy. 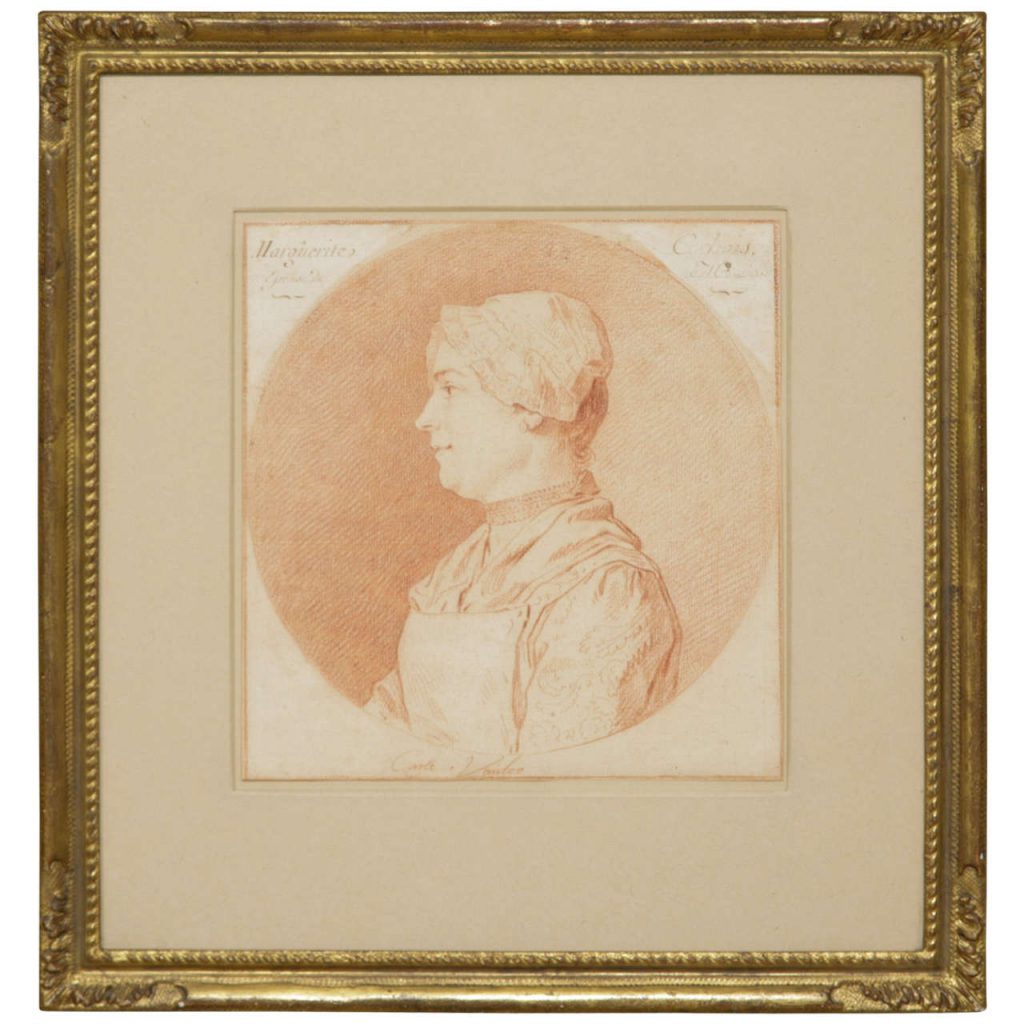 Important and large composition by Francesco Bartolozzi (Florence 1725-1815 Lisbon). Black, red chalk and brown wash drawing of Mercury carrying his caduceus looking up to the left. Signed and dated ‘F.Bartolozzi fecit 1776’ on the mount. Framed in a period Louis XVI gilt wood frame.

Bartolozzi was born in Florence. He went to Venice and studied engraving. His first productions in Venice were plates in the style of Marco Ricci, Zuccarelli, which began to draw attention. He then moved to London in 1764 where he lived for nearly forty years. He produced a large body of engravings, a large proportion of them are from the works of Cipriani and Angelica Kauffman. He also drew sketches of his own in red chalk. Soon after arriving in London, he was appointed “Engraver to the King” with a salary of £300 a year. He was elected a founding member of the Royal Academy in 1768. 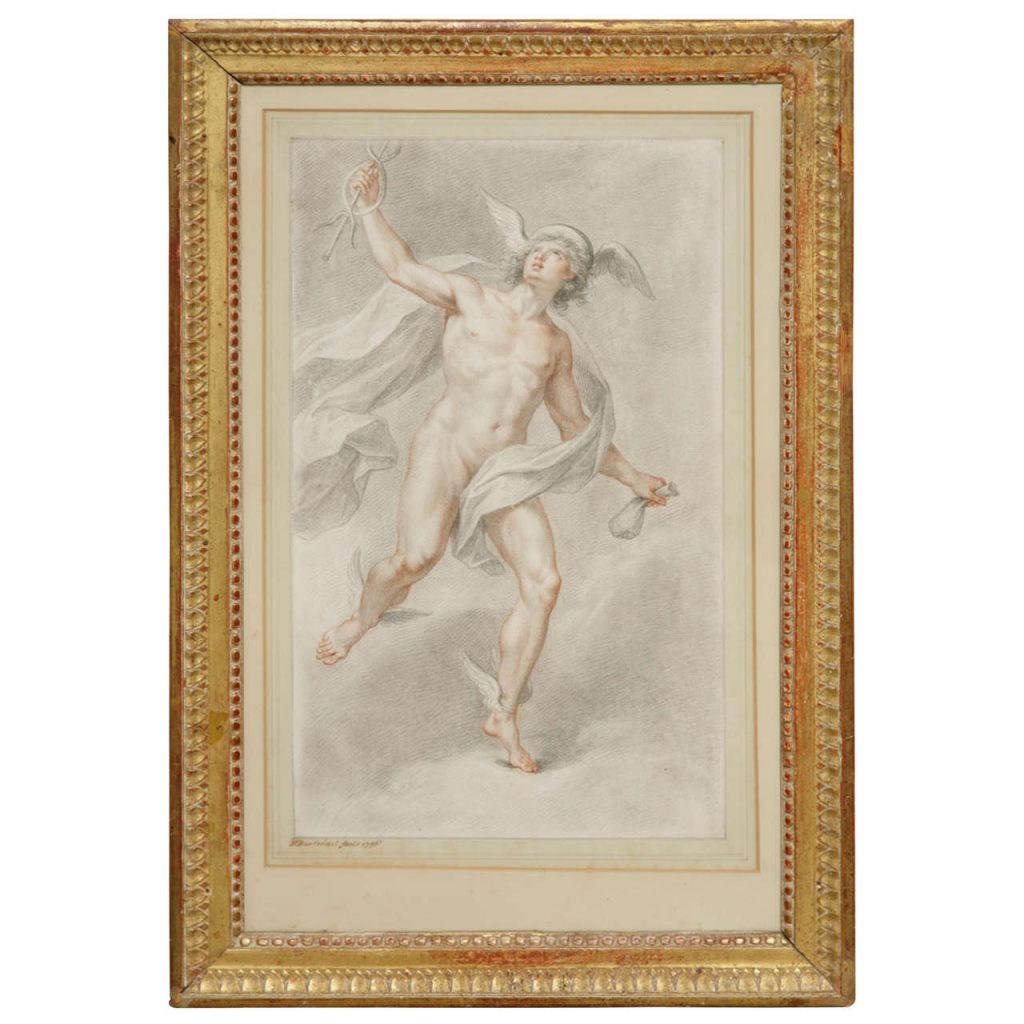 Portrait of an Artist, Circle Of Thomas Gibson ca. 1730.

Circle of Thomas Gibson (British, c.1680-1751). Sensitively observed and painted portrait of an artist, seated sideways on a mahogany chair in a library, half length, in a rust velvet coat and green velvet cap. Oil on canvas, bears remains of 19th century gallery label on the verso. Not re-lined. In general good condition. Framed in a period gilt and gesso picture frame. 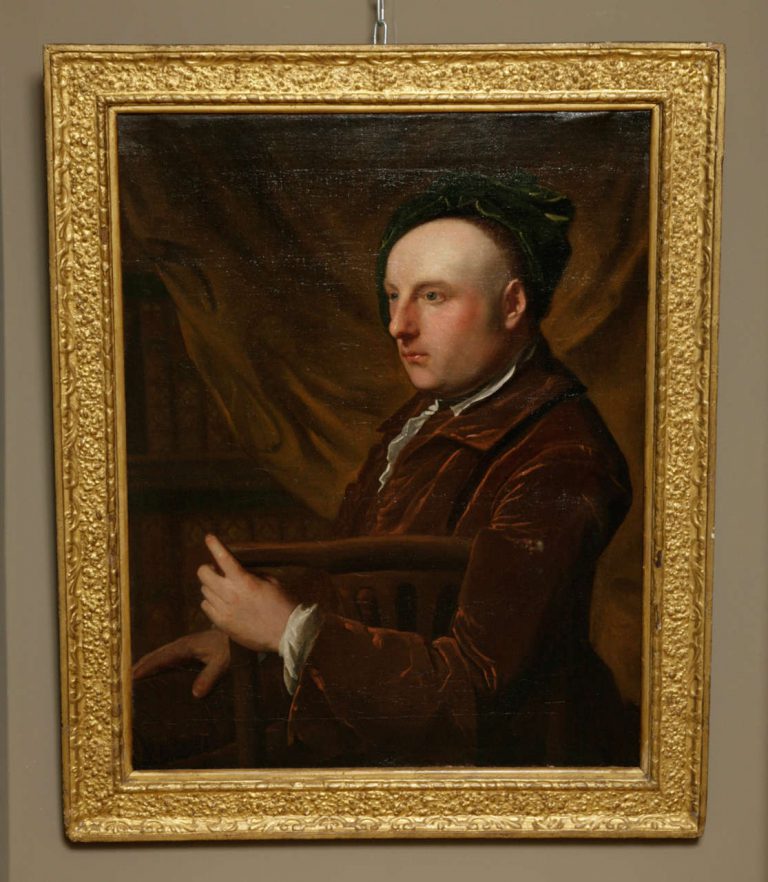 Portrait of an Artist, Circle Of Thomas Gibson ca. 1730.

A William and Mary Period Portrait of a Young Man ca. 1680

Enigmatic portrait of a young gentleman, England, circa 1680 in an original frame bolection frame. The sitter has a charming, quizzical, enigmatic expression. Possible attribution to Jacob Huysman who was active in this period. Good condition, recently been professionally cleaned. The frame and gilding is in original condition (some wear and losses to gilding). 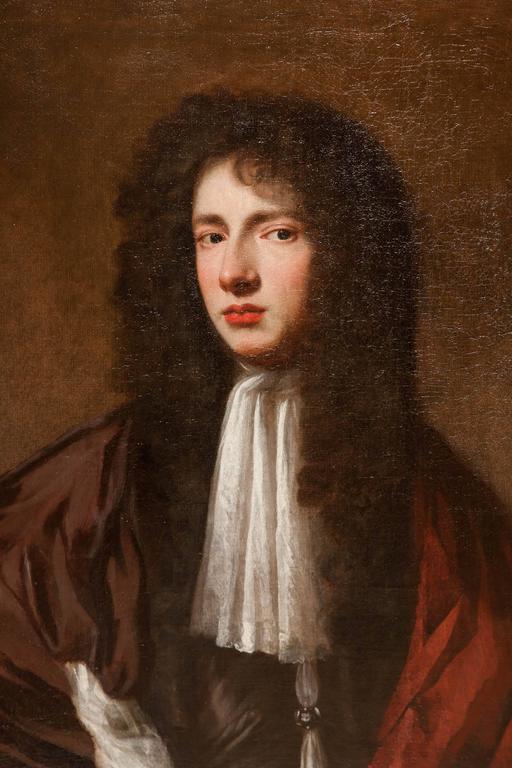 A William and Mary Period Portrait of a Young Man ca. 1680

Pastel Portrait of a Lady, Dutch, circa 1730

Pastel portrait of a lady in a classical setting. Circle of Nicolaas Verkolje, circa 1730 in a period early 18th century giltwood frame. A beautifully executed 18th century original pastel painting in a period frame. 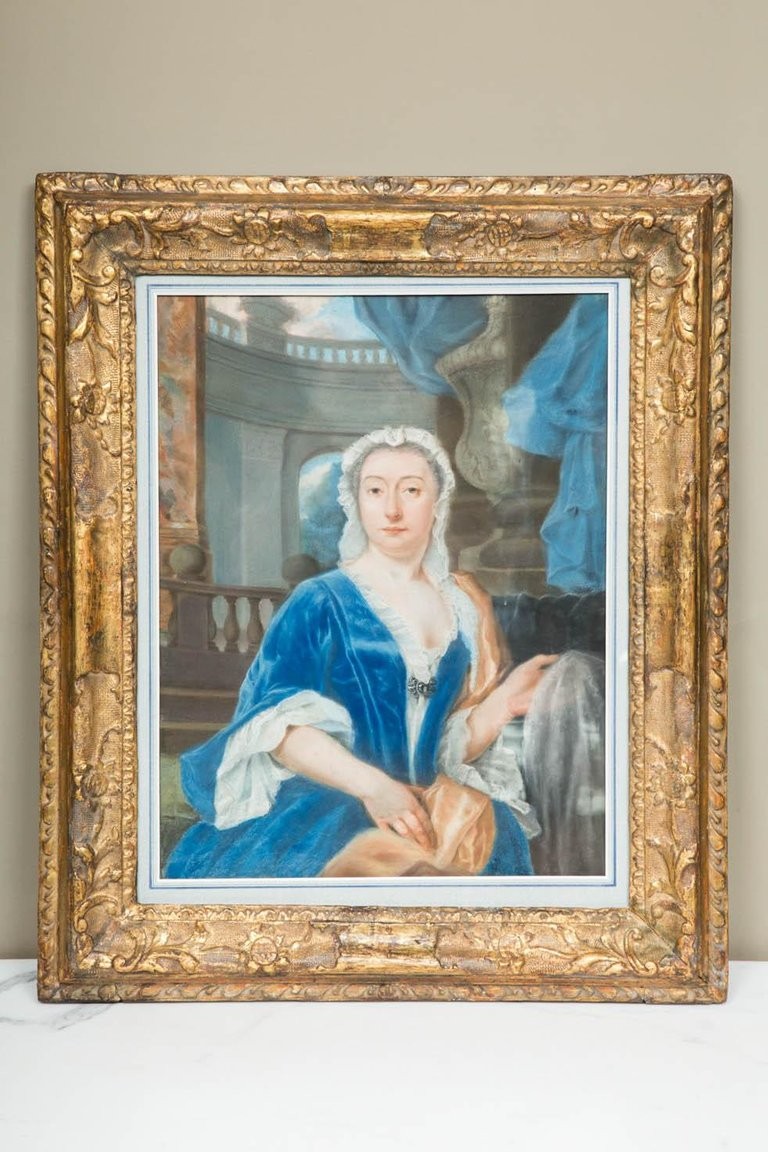 Pastel Portrait of a Lady, Dutch, circa 1730